Amid the tract houses, shopping centers, and traffic-choked roads that cover our community are historic gems that remind us of Annandale’s rural past. Hidden away at the end of Statecrest Drive, accessible from Annandale Road is Holly Hill, one of half a dozen historic properties in the Mason District listed as worthy of preservation on the Fairfax County Comprehensive Plan. 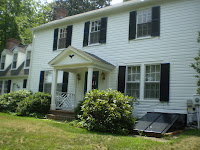 The Historic American Buildings Survey reported that Holly Hill was built by Mary Fitzhugh Mason in 1867, the Annandale Chamber of Commerce notes in its July newsletter. Mason had inherited a 174-acre parcel of land from her father, Mordecai C. Fitzhugh, in 1858. That land had originally been part of the 22,000-acre estate of William Fitzhugh.

Holly Hill remained in the Mason family until 1901. The original two-story house had a steeply pitched, gabled roof with interior end chimneys. An outbuilding, still present on the property, could have originally been used as a stable. J.M. Woodard, who owned the house from 1952 to 1970, built a one-and a-half story addition with gabled windows, a Colonial Revival-style portico, and Chippendale side railings. More recent owners added a swimming pool in back. The landscaping around the house includes plenty of hollies.
Posted by Annandale Blog at 10:45 PM

Email ThisBlogThis!Share to TwitterShare to FacebookShare to Pinterest
Labels: history