Ravensworth Road: Then and now 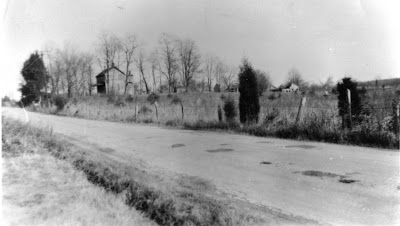 A reader who wishes to remain anonymous sent the photo (top) of Ravensworth Road looking toward Annandale. It was taken around 1950 or 1951, before St. Michael’s Catholic Church was built. The other photo, taken yesterday, shows Ravensworth Road from the intersection of Davian Drive. It might not be the same section of road. 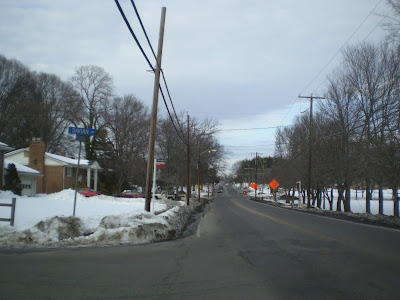 Here’s what the reader says about the photo and her recollections of Annandale:

“The house shown is the Coffey home. The only person living there at the time of the picture was Annie Coffey. Annie was odd, probably not of sound mind. I was so scared of her. I only saw her a couple of times when I was walking home from Annandale. She would peak out from behind one of the buildings as I went by. My mother was so upset because about every 28 days Annie hung a red cloth on the clothes line. I was way too young to understand at that time.” [Huh? That is weird.]

“Part of the property was sold to built St. Michael’s. I think Annie went to Staunton later on. [Staunton, Va., is the home of the Western State Hospital, a state psychiatric hospital.] Annie’s brother, Frank, had a personal hygiene problem. No one wanted to be around Frank. When Annie, or possibly another family member, died, Frank went to Bergen’s Men’s Shop for a suit to wear to the funeral. It was a challenge for the shop to fit the suit.”

“In the picture, the mailbox up the road was Maude Orndorff’s, my Aunt Maude. She never married and taught school at Washington & Lee in Arlington for 40 years. Can you believe I have run into at least six people in this area who had her as a teacher? She had narcolepsy and sometimes fell asleep in class, so none of them forgot her.”
Posted by Annandale Blog at 8:51 AM

Email ThisBlogThis!Share to TwitterShare to FacebookShare to Pinterest
Labels: history