The Fairfax County Planning Commission will consider an amendment to the Annandale Plan  next week that includes a proposal to widen Little River Turnpike through the commercial center of the community.

The Annandale Plan Amendment will be discussed at a public hearing, which also covers plan amendments allowing for a new medical facility adjacent to Inova Fairfax Hospital on Woodburn Road and a vision for a  town center at Baileys Crossroads. The hearing takes place June 23 at 8:15 p.m. in the Board Auditorium of the Fairfax County Government Center, 12000 Government Center Parkway, Fairfax. If you want to speak at the Planning Commission hearing, you can sign up online.

The Board of Supervisors will hold a public hearing on these issues July 13 at 4 p.m.

Gaining county approval for a plan doesn’t mean there’s going to be any construction any time soon, however. The Annandale Plan Amendment provides a framework for how the community should develop over the next 20 years. There is no timetable for implementation, and any road improvements would be contingent on future funding.

The current Plan Amendment recommends widening Little River because it views this option as being much more conducive to future mass transit systems, such as streetcars. It also would be less likely to hinder access to businesses as a one-way circulation pattern.

The plan’s transportation recommendations include the following: 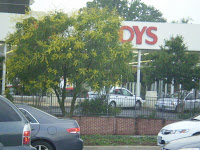 [Did you notice the golden rain trees in bloom along Little River Turnpike? These trees were planted several years ago as part of a beautification effort. The trees in the photo are in front of Pep Boys.]

• Widen Annandale Road to four lanes and improve the “horizontal alignment” of the section south of Maple Place.

• Improve Poplar Street to a standard two-lane section and extend it to Columbia Pike to provide a complete connection between Annandale Road and Columbia Pike. Improve the alignment of the existing Poplar/Markham Street intersection at Annandale Road.

The plan also suggests creating a roundabout at the intersection of Maple Place and Martin Avenue, pending a review by the county and VDOT.

While the plan notes that a comprehensive survey of heritage resources has not been conducted, it says, “The potential exists for significant heritage resources associated with the area’s 20th century residential and commercial history.” It recommends the need for further study of several sites, including the bowling alley at 4245 Markham St.; the former school at 7200 Columbia Pike; the fire station at 7128 Columbia Pike, the former Safeway grocery store at 7220 Columbia Pike [not sure where this is]; the six-bay, glass front commercial building with projecting roof at 4201-4223 Tom Davis Drive; and the 1930s houses converted to office and commercial space at 7224-7236 Columbia Pike.
Posted by Annandale Blog at 2:15 PM