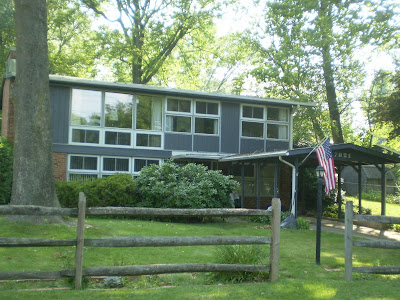 In an area full of traditional colonials, ramblers, and split levels, Holmes Run Acres stands out as one of the few neighborhoods in the Annandale area where you can find mid-century modern houses with lots of wood and glass.

The neighborhood’s distinctive architecture qualified it to be listed on the Virginia Landmarks Register in 2006 and the National Register of Historic Places in 2007.
The Holmes Run Acres Civic Association sought those designations—and contributed many volunteer hours to achieve them—to acknowledge and preserve the architectural integrity of the community and to encourage residents to maintain their home’s character. To help homeowners achieve that, the community published a guidebook, available online, titled Remodeling Your Holmes Run Acres House: Remaining Faithful to the Original Design. 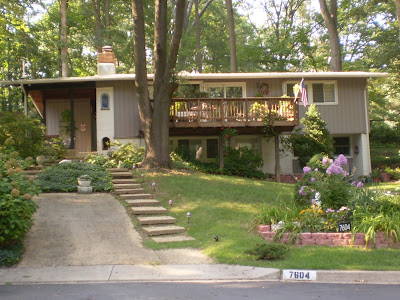 The historic designations are honorary and do not impose any restrictions on house modifications or additions. In fact, “there are some monstrosities in the neighborhood,” says Holmes Run Civic Association President Catherine Fort. For example, there is a house on Hemlock Drive with a two-story garage and one on Sycamore Drive that was remodeled as a colonial.

By and large, though, most of the renovations undertaken in the neighborhood are in keeping with the California ranch style of the original houses, which were built over a nearly 10-year period by three separate developers starting in 1950. The first homes, built by Luria Brothers Builders and Developers, had open wood-beamed cathedral ceilings, large expanses of glass, oak hardwood floors, and large brick-walled fireplaces.

In 1953, Gaddy Brothers Builders bought the remaining undeveloped lots and built larger homes following the same mid-century modern design. They added new features, such as wet plaster walls, a small deck off the living room, and central air conditioning. The third builder, Andre Bodor, built about 17 even larger homes in the late 1950s. He added such amenities as mahogany interior walls, and ultra-modern, fold-down electric cooktops designed to provide more counter space when not in use.

Holmes Run Acres has a very active citizen association; it’s been in place since 1951, and more than 75 percent of households are members, Fort says. “People care about this neighborhood.”

“It’s also a very social neighborhood,” she adds. Every week, from Labor Day to Memorial Day, everyone on the neighborhood listserv is invited to a party in someone’s house. This “Open Holmes” tradition started 25 years ago. The host provides the space and beverages, and the co-host provides the food. The gatherings range from simple get-togethers with cheese and crackers and a box of wine to elaborate themed parties.

There’s a book club, bridge club, fiber arts group, neighorhood watch, babysitters co-op, pet registry, and other activities. And the civic association sponsors a full range of events, including a fall festival at Luria Park, an international potluck dinner, community yard sale, house and garden tour every other year, and several children’s events, including a Halloween parade, Easter egg roll, and Santa Claus visits, where kids are asked to give presents to less-fortunate children.

The association has done quite a bit of publishing, and many of its booklets can be purchased from its website. Homes Run Acres: The Story of a Community, first published in 1976, was updated in 1991 and again for the community’s 50th anniversary in 2001. 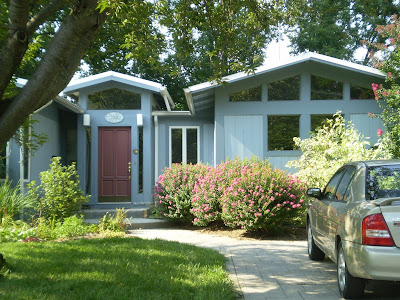 Other publications focus on nature, authors who live in the neighborhood, compilations of newsletter articles by gardening columnist George Graine (“the Grainethumb”), and a selection of newsletter articles by Sarah Lahr, one of several original homeowners. Lahr, now 90, has written an article in every newsletter since the first one was published in 1951. The Holmes Runner, published quarterly, is really more like a magazine than a newsletter. The four-color summer 2010 edition has nature photos, poetry, and reminiscences from Lahr, as well as civic association minutes and updates on neighborhood activities and residents.

In preparation for Homes Run Acres’ 60th anniversary in 2011, the civic association is having plaques created for all homes and installing new signs at the entrances to the neighborhood, Fort says. Other plans haven’t been finalized yet. At the 50th anniversary, the association held an art show featuring neighborhood artists, a dinner dance at the Fairview Park Marriott, and a larger-than-usual house and garden tour. Among the citizen association’s accomplishments, Fort cites the effort to reconnect the neighborhood with the Holmes Run Pool a few years ago, when people feared declining membership would force it to go under. “We totally redid the fee structure, allowing individual and senior citizen memberships, and it’s doing much better now,” she says. 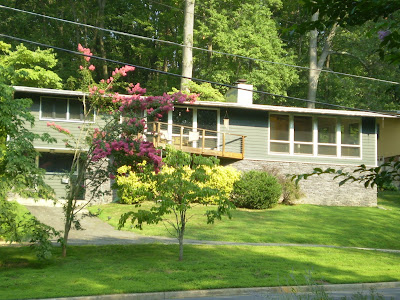 When asked about problems in the neighborhood, Fort cited the same sort of issues plaguing other communities in Annandale, such as speeding, graffiti, and people not picking up after their dogs.

Another problem, she mentioned, deals with the beltway HOT lanes construction at the nearby Gallows Road intersection. That issue has been mostly resolved, but at one point, drivers attempting to get to the inner loop from Merrifield were making about 50 to 60 U-turns an hour on Holmes Run Drive. Another problem involved residents of the Raintree townhouses on the other side of Gallows Road parking in Holmes Run Acres. That issue was resolved when the Raintree Homeowners Association agreed to provide more than two parking permits per household. 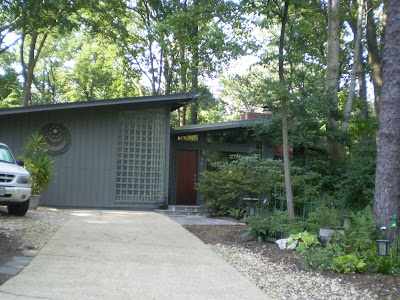 It’s hard to estimate average home prices in Holmes Run Acres because of the three different builders and because the houses vary so much in size and extent of the renovation, says John Purvis a realtor with RE/MAX.
Most houses generally sell for $400,000 to $600,000, depending on the condition and the extent of renovation and expansion. An original small unit that has been subject to foreclosure or short sale goes for the low to mid-$300,000s—still a far cry from the original sales price of $12,500 in 1951.

There are only two homes on the market now, and one, with four bedrooms and three bathrooms, is listed at $815,000. Purvis, who’s lived in the neighborhood for 40 years, says people who move to Holms Run Acres tend to stay there.

When Fort moved to the neighborhood 15 years ago, “there were very few children and virtually no babies. People thought the houses were too small to raise a family,” she says. But that is changing, and “now there are tons of little kids here. More people are realizing there is more to a home than size.”
Posted by Annandale Blog at 11:00 AM