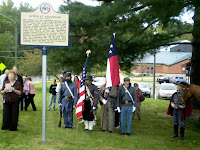 Col. John Mosby, Virginia Gov. William “Extra Billy” Smith, and some Civil War soldiers returned to Annandale Saturday for a ceremony unveiling the historic marker commemorating the “Action at Annandale.” The marker, on the corner of Little River Turnpike and Hillbrook Drive, next to the library, recognizes the historical significance of the roadbed for the unfinished Manassas Gap Railroad and a Civil War skirmish that took place Dec. 2, 1861.

On that day, approximately 200 Confederate cavalrymen overran a barricade defended by the 45th New York Volunteers. The skirmish ended when reinforcing troops from the 32nd New York Regiment joined the fight and the Confederates retreated toward Centreville. One federal soldier and a couple of Confederates were killed, and about 12 to 14 soldiers on each side were taken prisoner.
﻿
﻿Mosby didn’t actually participate in the Annandale skirmish, but the Mosby Raiders were active throughout the area during the war. Jimmy Fleming, a re-enactor who portrays Mosby, brought his horses Tinker, Virginia’s 2007 champion jumper, and Will, an expert in fox hunting. Fleming credits Mosby’s horse for the Gray Ghost legend, noting that it could easily jump a five-foot fence, allowing the general to make an easy getaway.

David Meisky, who portrayed Gov. Smith, is a member of the 17th Virginia Infantry re-enactment group, also known as the Fairfax Rifles. He says the governor was not present during the Annandale skirmish, but he had ridden in a stagecoach on Little River Turnpike. Both Meisky and Fleming are in Lee’s Lieutenants, a group whose members portray actual historical figures.

Anne Wendell of Sandston, Va., outside Richmond, came to the ceremony with her son Erich to see where Erich’s great, great, great grandfather, Valentine Wendell, had fought as a member of the 45th New York infantry, which was made up entirely of German immigrants. Valentine Wendell was later captured at Chancellorsville, held for six months, and continued to fight.

This summer, Anne and Erich, a freshman studying aerospace engineering at Virginia Tech, toured Civil War battle sites where Valentine had fought. Anne added Annandale to their itinerary when she learned about the historic marker dedication from the Annandale blog.
﻿
﻿ Library employee Barbara Peters also had a personal connection with the Annandale skirmish. She had known her ancestor had been a member of the 52nd New York regiment, but hadn’t known that he served here in Annandale until she saw the marker.

Following the unveiling ceremony, the group moved inside the library, and historic Ron Beavers gave a brief presentation on the Manassas Gap Railroad line, which was planned to extend from Manassas Junction to Harrisonburg—and eventually from Alexandria to the coal fields of western Virginia (what is now West Virginia), but those plans were disrupted by the Civil War. When Virginia seceded from the Union May 23, 1861, all work on the railroad halted.

﻿
﻿The remains of a bridge abutment in Poe Terrace Park across the street from the library and other stone and earthworks scattered around the area are all that’s left of that project. Beavers also noted that the First Manassas Railroad was the first railroad in the world that was used to physically transport troops to battle. ﻿Naomi Zeavin, the Mason District representative on the Fairfax County History Commission, lauded Annandale resident Helen Winter for proposing the idea for the historic marker in 2008 and working to get it approved. Initially, Winter hoped that focusing attention on the Annandale skirmish and the boulders from the railroad project would encourage the county to fix up Poe Terrace Park.

But that won’t happen any time soon, says Mason Supervisor Penny Gross, because the Hillbrook-Tall Oaks Civic Association has made it clear that it doesn’t want the park cleaned up. Gross expressed pride in all of the historic markers in the Mason District and says the marker commemorating the Action at Annandale is the 39th historic marker in Fairfax County.

﻿Sharon Bulova, chair of the Fairfax County Board of Supervisors, says the “historic marker program is so valuable because it helps us tell the story. There is history dotted all through Fairfax County.” A book is coming out next week with information on all of the historic markers in the Mason District. And all local residents interested in the past are urged to come to the Fairfax County History Conference Nov. 6.

Rep. Gerry Connolly spoke about the importance of the Civil War sites in the Mason District, including the spots in Bailey’s Crossroads where President Lincoln reviewed his troops and Col. J.E.B. Stuart’s encampment at Munson’s Hill.
Connolly says he had spent a lot of time touring Civil War sites in Virginia, but added, “I’m a Union man. I have no sympathy for the South at all.” In fact, he says, “the majority of the Virginia delegation in Congress are Yankees.” Meisky, in character as Gov. Smith, called that “a continuation of the occupation.”
Posted by Annandale Blog at 1:27 PM