Parliament Cleaners has served Annandale for more than four decades 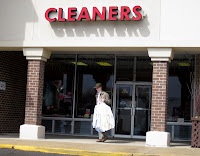 The Parliament Cleaners, wedged between the Safeway and the Miso restaurant in the Little River Shopping Center might well be one of the oldest continuously operating businesses in Annandale.
Parliament opened in 1968, and Connie Burnley has been the smiling face behind the counter since 1972 when her family purchased the business.

Her son, James, has worked there for 25 years, since he was 17. He puts in 10 to 14-hour days at Parliament while taking classes at Northern Virginia Community College. His ultimate goal is to go to a seminary.

Connie and James have known many of their customers for years and enjoy chatting with them when they drop in. Parliament is like an old-fashioned hardware store where people come to socialize while getting their errands done, Connie says.

Some customers keep returning to Parliament long after they’ve moved out of the area, and some come from as far as Bristow, Gainesville, and Gaithersburg.

If the (fake) brick fireplace and Tudor-style beams inside the nondescript building seem a bit incongruous, it’s because that’s all that’s left of what used to be a more complete Old English décor. Much of the interior was damaged by a water leak when the Safeway was expanded about 10 or so years ago, Connie says.

Both Annandale and the Little River Shopping Center have changed quite a bit over the years. Connie recalls her early years at Parliament, when people came to the shopping center to buy dresses at Mademoiselle, men’s wear at the Quality Shop, and children’s outfits at Young Fair. And “everyone used to eat at the lunch counter at G.C. Murphy’s,” a five and dime that occupied the spot now held by Blockbuster, she says. 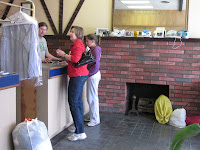 The shopping center also had a shoe store, pet store, flower shop, and a House of Fine Fabrics back in the day, Connie remembers. The Black Orchid and Domani restaurants closed several years ago, and the site of Café Muse was once a Lum’s restaurant. Only Casa D’Mama has been around nearly as long as Parliament.

The changes keep coming: The Something Special Hallmark shop closed last summer, and the the Goryo Electronics shop shut down about a month ago.  Blockbuster’s days might be numbered, as the company has filed for Chapter 11. Among the stores that opened in the shopping center in 2010: Dollar Tree, Petco, and Foster Bank.

Connie is proud that Parliament recently got a 98 rating from Washington Consumers’ Checkbook and became a “green” drycleaner by switching to environmentally friendly, organic chemicals.

In addition to dry cleaning, Parliament does laundry and alterations and cleans handbags, toys, and stuffed animals. It subcontracts tailoring and suede and leather cleaning. Located at 7412 Little River Turnpike, Parliament is open 7:30 a.m.-7 p.m. on weekdays and 8 a.m.-5 p.m. on Saturdays. The phone number is 703/941-2606.
Posted by Annandale Blog at 10:07 AM