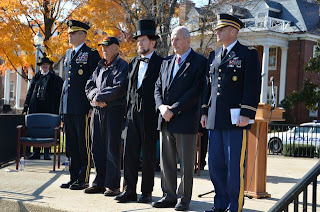 Hundreds of Civil War re-enactors, members of the military, and spectators commemorated the sesquicentennial of President Lincoln’s Grand Review of the Troops Saturday at Fort McNair in southeast Washington, D.C.
The event, along with related activities last weekend, including a Grand Ball, history conference, concert, and history mobile—all in the Bailey’s Crossroads area—were sponsored by the Lincoln at the Crossroads Alliance  with support from the Abraham Lincoln Bicentennial Foundation and the Lincoln Forum.
The first big battle of the Civil War, by a creek called Bull Run in Manassas, took place in 1861. “The Union’s defeat served as a wake-up call,” reports William Jay, who covered the re-enactment in his blog Jaybird’s Jottings. President Lincoln appointed Maj. Gen. George B. McClellan as the overall commander of the army. In November, 70,000 of the built-up Army of the Potomac marched at Bailey’s Crossroads in front of Lincoln. 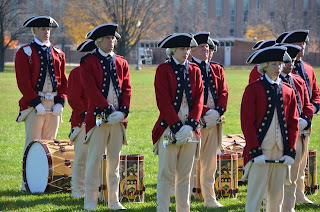 Lincoln re-enactor Jim Getty, wearing a stovepipe hat and black coat, presided over the ceremony Saturday, which included the Joint Forces Color Guard and the Continental Fife and Drum Corps of the Third Infantry Regiment.


The Grand Marshal was Ed Bearss, chief historian emeritus of the National Park Service. The event included remarks by Commanding Gen. Michael Linnington of the Military District of Washington, Col. Carl Coffman, commander of the Joint Base Mayer-Henderson Hall, and Lincoln Forum Chair and former Chief Justice of the Rhode Island Supreme Court Frank J. Williams. The Bailey’s Crossroads Baptist Church Choir performed the National Anthem and the Battle Hymn of the Republic. 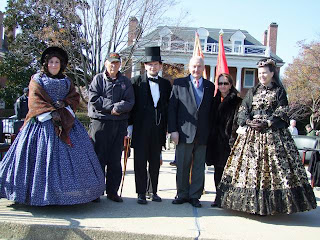 Organizers had expected the re-enactment of the Grand Review to take place in Bailey’s Crossroads but those plans had to be scrapped due to logistical difficulties. Fort McNair turned out to be a fitting location, Jay wrote, noting there are connections between the Civil War and Fort McNair.
“Less than a mile to the south of the parade grounds where the re-enactors marched, lies the spot along the shore of the Anacostia River where the Pearl sailed away in 1848 with 77 escaped slaves. The ship was captured, but a powerful political message had been sent,” Jay wrote. Almost 20 years later, the four convicted Lincoln conspirators were executed by hanging, near Building 20 (Grant Hall), which is about 100 yards south of the parade grounds.

“Significant numbers of those boys and men who marched at Bailey’s Crossroads were injured or never came home,” he noted. “The quiet and reverential grounds of Fort McNair served the event quite well.” [Photos (c) Bruce Guthrie] 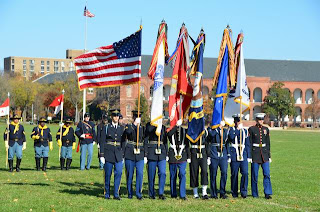 Posted by Annandale Blog at 1:38 PM