Many longtime Annandale residents will miss Annandale Florist when it closes for good at the end of the year. The owner, Gary Sherfey, however, is looking forward to retirement.

“In a way, it’s bittersweet,” he says. “but it’s something I’ve been doing for 45 years, so there are a few things my wife and I want to do.” He plans to go on more mission trips with his church, Annandale United Methodist Church, including an upcoming trip to help people in New York and New Jersey clean up from Hurricane Sandy. He also wants to play more golf.

The building, at 7224 Columbia Pike, is up for sale or lease, says Sherfey. It’s owned by a limited liability partnership in which Sherfey is a partner.

The store was founded by Gary’s parents, Mabel and Gib, in 1955.  Gib had cultivated orchids and other plants in a greenhouse in the backyard of their home on Annandale Road, and Mabel studied floral design at a school in Washington, D.C.

The building had been a private house built in the 1930s, and the Sherfeys purchased it from two teachers who lived there and converted it to a flower shop. They used to have a garden shop there, too.

Gary’s wife, Patricia, sometimes works in the shop, as does their son, Brian. According to Gary, some customers have been coming to the shop for decades.

Over the years, Sherfey has seen a lot of changes in Annandale. He remembers when the site of the old Fuddrucker’s restaurant across Columbia Pike (soon to be a Walgreen’s) was a gas station, then became the Three Chefs restaurant. The Bank of America building directly across from the Annandale Florist used to be a Safeway. The old Sunset Grille building on Columbia Pike was originally Bill’s Café, and then became Tom Weston’s restaurant.

There was a convenience store called Roadside Market where the Jiffy Lube is now, he says. Kerlin’s Corner on Little River Turnpike sold outdoor plants. The ACCA building on Columbia Pike was once Annandale Elementary School. Further down the Pike, there was a Topp’s Drive In where the Burger King is now. There was a Drug Fair at the site of the closed Bloom, which was formerly a Magruder’s grocery store.

The Galinas Gas Station was also near there, and Carol’s Hamburgers was on the other side of the Pike, Sherfey recalls. Magill’s Restaurant on Little River Turnpike was once the site of a restaurant called the Mill Mining Co.

The flower business has changed, too, over the years, Sherfey says. The Internet has had a huge impact, of course, and there is a lot more variety in flowers nowadays. In the past, it was mostly just roses, mums, and glads, he says. One thing has remained a constant, though: Valentine’s Day, Mother’s Day, and Christmas are still the busiest times for flowers. 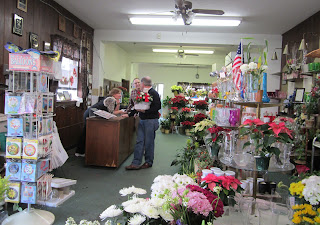