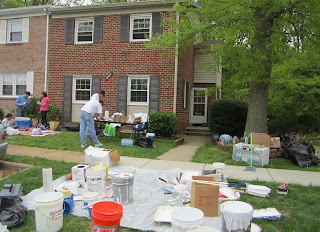 The residents of 4553 King Edward Court in Annandale probably wouldn’t have been able to live there if it wasn’t for the assistance provided by the Brain Foundation. All four men are affected by mental illness.

They also need help with home repairs and maintenance. So more than 25 volunteers from Temple Rodef Shalom in Falls Church and Congregation Etz Hayim in Arlington spent the last two Sundays fixing up the house.

The volunteers repaired a stair railing, installed additional banisters, painted all the rooms, replaced a microwave, removed an old non-working trash compactor to provide more space in the kitchen, put a grate covering on a sump pump, and replaced a bedroom door that had been damaged by an angry resident. The home repair effort was just one of dozens of community service projects carried out by temple members this month.

Over the past 10 years, the non-profit Brain Foundation purchased seven townhouses and rented them to people with brain diseases, such as bipolar disorder and schizophrenia. Two of the houses are on the same street in Annandale, three are in Fairfax, one is in Reston, and one is in Fair Lakes.

Brain Foundation founder and board chair Trudy Harsh prefers the term “brain disease,” because “mental illness has such a stigma and there is no real definition of it. The brain is an organ and is subject to disease just like the heart and kidney,” she says.

Pathway Homes, a mental health services organization based in Fairfax, selects the tenants and provides counseling and other services to them, such as advice on handling money and getting along with roommates.

There’s a huge waiting list for assistance. According to Harsh, there are 500 people with brain diseases in Fairfax County who need housing.

The residents of 4553 King Edward Court include a 56-year-old man who works at a grocery store, a man in his 20s who works at a recreation center, and two who rely on federal Supplemental Security Income. They weren’t home when the volunteers worked on their house.

All of the tenants in the Brain Foundation program contribute rent—set at 30 percent of income. The foundation pays the utility bills and HOA fees. The furnishings are donated by churches, synagogues, and individuals.
The Brain Foundation purchases houses that are within walking distance of a grocery store and public transportation, Harsh says. Each house has four bedrooms and four tenants, which allows everyone to have some privacy. The two houses in Annandale are all male; some of the other houses are all female.

Before they received housing from the Brain Foundation, many of the tenants of these houses were homeless. Others were in mental health facilities or lived with their aging parents. In some cases, they had trouble finding an apartment because of previous trouble with the law.

While there have been instances where tenants of Brain Foundation houses have been evicted because of behavior problems, Harsh said the only complaint from neighbors of the Annandale houses had to do with the TV being too loud.

Harsh calls the homes provided by the Brain Foundation “Laura’s Houses,” in honor of her daughter, who had suffered brain injury at age 8 caused by surgery to remove a tumor. Laura struggled with physical and emotional issues for the next 30 years, and Harsh saw how difficult it is for people with brain injuries to find housing. “I saw a failing system. I don’t think we’re getting much better,” she says.
Posted by Annandale Blog at 9:30 AM