Former Oliver farmhouse on Gallows Road on the market again 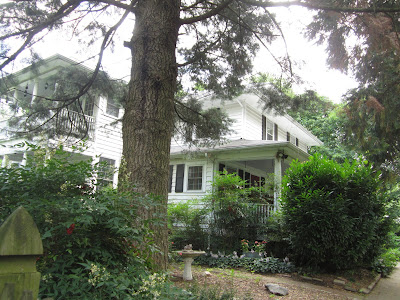 The wood frame house has had several additions since it was built in 1932. It has four bedrooms, three full bathrooms, a half bathroom, a large front porch, an upstairs porch, and backyard deck.

It’s on a 1.54-acre lot zoned R-3, which means the buyer could tear it down and build four new houses. If the new owners want to live there, they could still build two houses on the property, said realtor Mary Hurlbut of Weichert Realtors.

The house is not just a relic of old Annandale, it’s also got some history attached to it. According to the website, “A Look Back at Braddock District,” the house played a key role in the legendary “Annandale cattle drive.” The house was built by Robert Stringfellow Oliver, a former streetcar driver in Washington, D.C., had lived on a farm in Shirlington. When that area got too populated for him, he bought 89 acres in the more rural Annandale community in 1926 with the idea of relocating his dairy farm there.

On Christmas Eve, 1931, Oliver, his wife Charlene and their seven children drove 24 head of cattle from Shirlington to their new farm in Annandale. The Braddock history website says “the cattle drive and move were so well planned that Mrs. Oliver was able to entertain as usual on the very next day, Christmas.”  In addition to dairy cows, the Olivers also raised pigs, chickens, and horses and had a vegetable garden.

The former Oliver farmhouse is all that’s left of the old farm. The rest of the property is now part of the Broyhill Crest neighborhood.

The current owners of the house at 2011 Gallows Road, Ed and Carla Hubacher, hope to downsize. Their five children are grown up, and they plan to move to a smaller house in Old Town, Alexandria.

Although the Gallows Road house is on a main road, it’s mostly hidden behind some large trees.

Posted by Annandale Blog at 9:09 AM