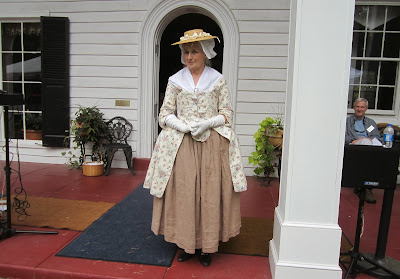 Several “ghosts from the past” welcomed visitors to Oak Hill, the oldest house in Annandale on Sept. 28. Standing by the doorway (above) is “Suzanna Fitzhugh,” the wife of Richard Fitzhugh, who built Oak Hill, circa 1790, on the 22,000-acre Ravensworth Tract, one of the largest land grants in the New World. They had eight children, but not much is known about her life. 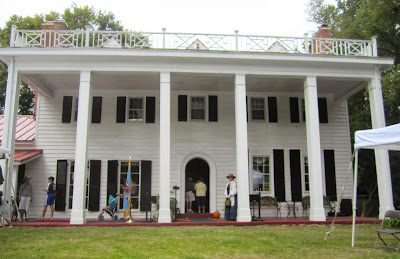 Oak Hill is privately owned; the Scheetz family has lived there for the past six years. As part of an agreement with community and historic preservation activists who saved the house from the clutch of developers, the Fairfax County Board of Supervisors approved a historic easement in 2004, requiring the owners to allow the public to visit at least once a year.

On the most recent Oak Hill Day, the first floor of the house was open for public tours, while visitors enjoyed music by the Oak Hill Trio, refreshments by students in the Annandale High School Culinary Arts program, and presentations on the history of the area and everyday life at Oak Hill.

Much of the house has been restored and added to over the past 200-plus years, but several old features remain, including a door on the living room floor providing access to the root cellar. The imposing, two-story columns on the front porch look like they were part of the original house but were actually added in the 1970s. Thomas Jefferson was a frequent overnight guest on his trips between Monticello and Washington, D.C. 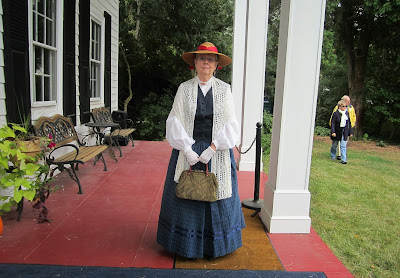 Among the “characters” who charmed the guests at Oak Hill Day was Linda Lau (above), a member of the Victorian Society of Falls Church, wearing a typical day outfit from the 1860s, including a cotton skirt over a corded petticoat, blouse, and vest with peplum; a crocheted shawl; and lace fingerless gloves. Her coral and gold jewelry and straw hat are original.

Jenee Lindner portrays Sarah Tracy (below), a resident of the Annandale area who saved Mount Vernon in the 1840s when it had become dilapidated and facing ruin. After failing to get the federal government to restore George Washington’s home, Tracy formed a private group that raised funds to purchase and restore the estate. The Mount Vernon Ladies Association still owns and maintains it. 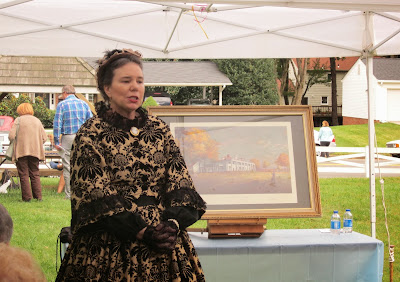 Jon Vrana, president of the Burke Historical Society, portrays David Fitzhugh (below right), a bachelor who lived at Oak Hill during the Civil War. According to land records, Fitzhugh had 75 sheep, along with hogs, oxen, and horses; grew wheat, oats, and Indian corn; and owned 27 slaves.

At one point, he was arrested by Union soldiers and thrown into the terrible Old Capitol Prison for several days without being told what his crime was. During his incarceration, soldiers looted his property, Vrana said. 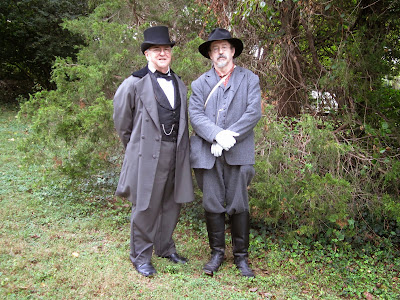 The man in the top hat (above) is Francis Asbury Dickens, a neighbor and friend of David Fitzhugh who practiced law in Washington, D.C.,  and was also locked up in Old Capitol Prison. He is portrayed by John Murphy, a member of the board of Friends of Fairfax Station. Murphy’s outfit is a replica of what a gentlemen of that period would have worn. His hat, purchased at Dirty Billy’s Hats in Gettysburg is made of nutria, a kind of swamp rat, that was a less-expensive alternative to beaver. 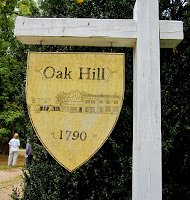 There are real ghosts associated with Oak Hill, too. There’s a legend about a former resident, Ann Fitzhugh, who was accidentally killed by a Continental soldier during the Revolutionary War while she was hiding in a secret room. Over the years, residents have reported seeing a blood stain on the ceiling and heard strange noises they’ve attributed to the ghost of Miss Ann.
Posted by Annandale Blog at 10:00 AM