Fairfax County officials told local residents at a community meeting Jan. 7 that a real estate deal involving a land swap and land purchase is necessary to spur redevelopment in a rundown section of Bailey’s Crossroads.

The real estate transaction for the 4.47-acre area known as the Southeast Quadrant includes these elements:
The Board of Supervisors will hold a public hearing on the land swap on Jan. 12. If it is approved, AvalonBay would build a 375-unit apartment building facing Moncure Avenue. Future plans call for an East County Government Center in the middle of the Southeast Quadrant and a new road connecting Columbia Pike and Seminary Road.

All the buildings currently in that area, including the Landmark building, the Bailey’s Crossroads Community Shelter, and the old Safari restaurant, would be demolished.

At the meeting, several residents raised concerns about the county’s plans to purchase the Landmark building: They complained the county is paying too much, the county is using taxpayer dollars to benefit AvalonBay, and the apartment project could proceed without the need to tear down that building.

“Why is the county tearing down one office building and planning to build another?” one resident asked. “It’s not a good deal for the community,” another resident said, adding that the area has a 47 percent office vacancy rate.

According to Tracy Strunk, deputy director of the Fairfax County Office of Community Revitalization, the Landmark building has to be taken down to make room for the new road and to ensure there is enough space for the county office building.

The county and Landmark agreed on a purchase price of $6.4 million, with AvalonBay paying $250,000 of that and the county paying the balance. The county would use transportation funds for the purchase, not money slated for schools or other purposes.

Landmark had wanted to sell the building for more than what the county was willing to pay; their starting price was $9 million, said Deputy County Executive Robert Stalzer, who added, “We had appraisals done that were actually higher than what we’re paying.”

“We believe the Landmark acquisition is in the best interest of making redevelopment in this part of the county happen,” he said. “Taking the Landmark building out of the equation will allow us to do more faster than having to work around it. 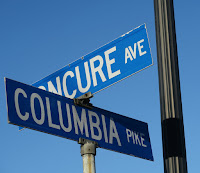 According to Strunk, the county has determined that an East County office building “would be appropriate for this site,” but there hasn’t been a decision to go forward with that.

Stalzer said the county building is needed because it is spending $3.4 million a year on leased office space and it would be advantageous to consolidate services in one building. It would house agencies currently located in Annandale on Little River Turnpike and other locations..

The AvalonBay apartments would be market rate, although the county requires 12 percent of the units to be workforce housing, meaning they would be affordable to households at 80 to 120 percent of the area median income.

After the real estate transaction is agreed to, the rezoning process will begin, probably during this summer, Strunk said. AvalonBay would then develop a site plan covering the technical engineering details. That work could start next fall and continue through spring 2017.

Shelter would be relocated

A key element of the Southeast Quadrant plan is the need to relocate the Bailey’s Crossroads Community Shelter. “Moving the shelter is integral” to the whole process, Stalzer said. “There are a lot of moving parts here.”

The shelter will probably have to be moved to a short-term, temporary location until the county can find a suitable permanent site that can also provide transitional housing, not just bunks for the night, said Mason Supervisor Penny Gross. “The way homeless services are delivered now differs from when shelters were established. That model doesn’t work as well anymore.”

The county officials declined to say where the homeless shelter would be relocated until negotiations with the landowner are finalized. “We believe the negotiations will be successful,” Stalzer said. If not, “we have at least two other options.”

Gross said the new road would create a more logical connection between Seminary and Columbia Pike. An exact location of the road hasn’t been determined, but it would need to line up with the traffic signal at the entrance to the shopping center on the other side of Columbia Pike, said Strunk.

The Fairfax County Department of Transportation has sketched out several options but a final decision would depend on what happens with the properties in that area, she said.

This county has tried to promote the redevelopment of this area for many years, Strunk said, but developers weren’t interested until a new road became a part of the plan. “This doesn’t guarantee that it will happen, but it does set it up,” she said. There would also be a grid of streets inside the Southeast Quadrant.

Several residents brought up the issue of overcrowded schools, especially Glen Forest Elementary, which serves the Southeast Quadrant and is already way above capacity.

School capacity issues would be considered during the rezoning and proffer processes, Gross said, and the school board might want to make changes in school boundaries.

Seventy-percent of the units in the AvalonBay apartments would be studios and one-bedroom units; the rest would have two bedrooms, Stalzer noted, so there wouldn’t be a huge increase in the school-age population. Under the county’s formula, he said, there would only be about 25 to 30 new students.

A school had been in an earlier plan for the Southeast Quadrant but now there’s a conceptual plan for a school at the Willston Center instead which was included in the Seven Corners comprehensive plan approved by the Board of Supervisors in July.

Several residents who live along Lacy Boulevard and Ellery Circle raised concerns about increased traffic and overflow parking generated by 375 new housing units plus the many employees at the new office building.

Those issues would be considered during the rezoning process; the upcoming board hearing is just on the land swap, Gross said. AvalonBay will have to have to come up with a plan for addressing traffic and parking.

“This is just the first step,” Gross said. The rezoning proposal will be reviewed by the Bailey’s Crossroads Revitalization Corporation, Mason District Land Use Committee, and several county agencies before it’s taken up by the Planning Commission.
Posted by Annandale Blog at 9:30 AM