Lakeside Plaza, the highrise on Columbia Pike across from the Lake Barcroft dam, is more than a condominium – it’s a community with lots of amenities and a full calendar of social activities.

The building, at 3800 Powell Lane, Falls Church, has 353 units, ranging from units with one bedroom and one bathroom to a 2,168-square foot penthouse with three bedrooms, a large walk-in closet, and three bathrooms

Lakeside Plaza has several features that distinguish it from other nearby high rises, says manager Keven Lehman: It has 24-hour front desk service with staff that call residents when they have a visitor and send an email when residents receive a package.

There is no additional charge for pets. The building allows each unit to have up to two dogs or cats of any size. The entire property is smoke free, including balconies and common areas. The only places where smoking is allowed is inside people’s homes and vehicles.

“Highrise living offers residents convenience for services,” Lehman says. For a small fee, the condo staff will take care of all kinds of jobs, from changing a light bulb to installing a new bathroom vanity.

The condo fee varies according to unit size, but he says it’s the lowest per square-foot in the area for buildings that offer as many amenities.

More improvements are happening this fall, including exterior painting of all non-brick surfaces and replacing the landscaping with native plants.

The building has commercial spaces on the ground floor, including Mr. Ho’s Barber Shop and Proplocate Realty. Another space is being renovated for a daycare center. Baby Home Daycare, set to open in July, is already accepting applications. 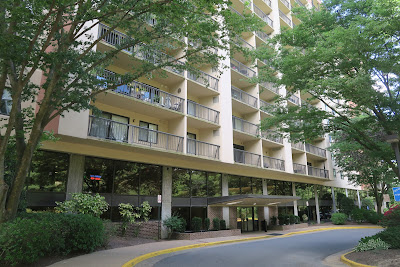 Cooking lessons have featured cuisines from Afghanistan, India, and other countries, reflecting the “fantastic diversity of the residents,” Lehman says. Residents’ ages vary greatly, too. The youngest is a newborn, while the oldest is 95.

“People were very welcoming when I moved in on a July 4 weekend about seven or eight years ago,” says Janice Siegel, who serves on several condo committees.

The main reason she moved to Lakeside is because of the indoor pool. She also likes the gym, the club room, the building’s proximity to Washington, D.C., and the view of Holmes Run Stream Valley Park from her fifth-floor home.

According to Lehman, 30 percent of the units are being rented out by the owners. Because the building is FHA approved, there’s a limit on how many units can be non-owner-occupied.

Residents get one designated parking space and storage space. They can also rent extra storage space if needed.

One recent issue of concern to residents involves the construction of the Ambrose Hills townhouse community on the other side of Powell Lane. They have requested parking be limited along Powell Lane, as that is the only way to access Lakeside Plaza.