By Dave Lincoln and Beverley Rivera of Friends of Accotink Creek

Vernal pools, also known as ephemeral pools, are seasonal wetlands. They are temporary and magical ecological features that provide essential habitat for a variety of life and breeding grounds for frogs and salamanders.

Hayslett, of Virginia Vernal Pools, is conducting an inventory of vernal pools in Fairfax County as part of an initiative by the Fairfax County Park Authority. Vernal pools are vulnerable to a variety of threats associated with human impact, and this inventory will support efforts to monitor and protect them.

He began the tour in the parking lot by decontaminating his boots, scrubbing them in a tub of bleach and water, and encouraged everyone else to scrub footwear that had been worn in other watersheds. That is necessary to protect frogs and salamanders from the dreaded chytrid fungus that is causing severe population declines and extinctions of amphibian species around the world.

As the group walked downstream to a pool near the Cross County Trail below Lake Accotink, American toads were singing love songs along the creek. 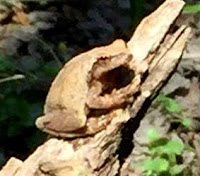 Hayslett scooped tadpoles into Ziploc bags filled with water and handed them to his enthralled crowd, talking them through the steps to identify the tadpoles.

Hayslett had hoped to find fairy shrimp. When he first entered the pool, he had startled a duck and that can indicate the presence of a fairy shrimp which ducks love to eat. While we did not find any fairy shrimp that afternoon, Hayslett has discovered some in Fairfax County.

Fairy shrimp have a fascinating life cycle. Unlike frogs and salamanders, he explained, fairy shrimp never leave the pool, even as it dries out. Their eggs can remain viable in a dry environment for hundreds of years, hatching only when rains replenish the pool. The eggs can be transported to other pools by wind and birds.

Around the pool, the group found pickerel frogs, spring peepers, a garter snake, and a variety of invertebrates – not vernal pool indicators but certainly crowd pleasers. For the plant lovers on the tour, there were spring ephemerals, such as Turk’s cap lilies and skunk cabbage.

In Virginia, vernal pools range from natural upland wetlands independent of a stream, some of which date back 20,000 years, to manmade structures that become functional vernal pools.

But why would anything adapt to a pool that’s constantly drying out? The biggest advantage is the lack of predation from hungry fish.

The disadvantage, of course, is that these fleeting pools can dry up before a creature has matured from its aquatic to its terrestrial stage, for example from being a tadpole that needs water to survive to a frog that can live on land and only needs water to breed.

As the hike proceeded up the trail along the west side of Lake Accotink, the group stopped to observe, with the aid of binoculars, a bald eagle in its nest.

A large manmade pond along the old railroad bed about the size of baseball field was possibly built in the 19th century to hold water for steam locomotives.

Although the pond had held more than a foot of water a month ago, it was now a mud flat. The reason? A stand pipe that was built to keep the water below a certain level had been deliberately caved in. The concrete pipe had been smashed, allowing the pond to drain under the railroad bed and into the lake. A dead and dried-out mass of wood frog eggs indicated that the pond could have been a healthy vernal pool if it had not been intentionally drained.

Ironically, many such drainage efforts in the 20th century were intended to control mosquitoes. But as it turns out, the mud flats are highly productive mosquito breeding grounds, whereas the damselflies and salamanders who thrive in vernal pools feed on mosquitoes and decimate mosquito populations.

In the drained pond, the group collected something that has become more prevalent than amphibians in the Accotink watershed: trash, including a fire extinguisher, a bicycle, and many filthy plastic water bottles.

Vernal pools that have been destroyed through incorrect practices could be brought back to productivity with relatively simple restorative measures.

The weather in Northern Virginia this year has not kept vernal pools wet long enough for species to succeed, but deliberate drainage by humans has not helped. We found several pools that were desiccated from this year’s drought and intermittent warm sunny conditions in between cold snaps. Water levels in pools throughout Lake Accotink Park have been controlled by culvert pipes installed to drain high water toward Accotink Creek.

Fairfax County’s vernal pools are vulnerable to a variety of threats associated with human impact on the environment, and hopefully Hayslett’s inventory will support efforts to protect them. He encourages anyone who has knowledge of a vernal pool that might not have been inventoried to contact him at mhayslett@sbc.edu.