The shop, next to Kogiya Korean BBQ, will offer Asian tea drinks, such as bubble tea, milk tea, and its specialty, “Gong Cha milk foam series.” Teas come in various flavors, such as passionfruit, taro, chocolate, lemon, watermelon, and mango, to name a few, plus optional toppings, like grass jelly, coconut jelly, red bean, and others. 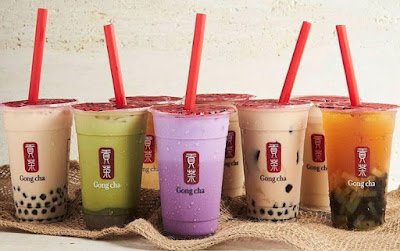 You won’t have to wait until the store opens to try those teas: Gong Cha will be at the Taste of Annandale, a street festival Oct. 13 on Tom Davis Drive.

Later on, probably next spring, the menu will be expanded to include waffle desserts and ice cream, says franchisee Kevin Tran of Springfield.

The Gong Cha company was established in Taiwan in 2006 and since grown to nearly 1,500 outlets worldwide. The Annandale shop will be the first one in Virginia.
Posted by Annandale Blog at 9:00 AM