The Mason District Land Use Committee voted Nov. 27 to not recommend approval of Woodburn Manor, a 72-unit 55+ housing development proposed for Gallows Road between Libeau Lane and the Raintree condominium.

The dozens of opponents of the proposal who packed the MDLUC meeting cheered the decision.

The Fairfax County Planning Commission’s public hearing on the project is scheduled for Dec. 6 but likely delay the hearing if the developer, Christopher Land LLC, decides to revise its application. The MDLUC vote is not binding, however, so the project isn’t necessarily dead.

E. John Regan Jr., executive vice president and chief financial officer of Christopher Land, says he plans to consult with his team and Mason Supervisor Penny Gross before deciding on the company’s next step.

A previous application by Christopher Land seeking an amendment to the county’s Comprehensive Plan for a 66-unit townhouse development on the 9-acre property was withdrawn last year in the face of opposition from the residents of the surrounding community and the county’s planning and zoning staff.

The latest proposal calls for an even denser development consisting of 72 units of age-restricted housing, including 12 townhouses, 12 single-family detached houses, and a four-story multifamily building with 48 units. 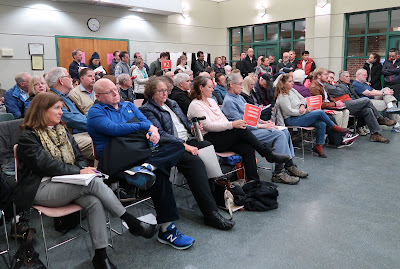 This time, Christopher Land is seeking a zoning special exception rather than a plan amendment. Under the county’s zoning rules, a higher-density independent living facility for people age 55 and older can be allowed on a property zoned residential if the Board of Supervisors approves a special exception. The current residential zoning designation for the property, R-2, would not be changed.

At the MDLUC meeting, residents of Holmes Run Acres, Raintree, Gallows Estates, and other nearby neighborhoods, raised many of the same complaints about the current application as the previous one:
“We remain deeply concerned. This would be a precedent-setting intrusion in a stable neighborhood,” said Edith MacArthur, president of the Holmes Run Acres Citizens Association, who has been coordinating the opposition.

Local residents were particularly incensed about Christopher Land’s contention that the development won’t lead to significantly more traffic on Gallows Road. A company representative said a traffic study found there would only be an average of two more trips during the morning rush hour and six more trips in the evening.

VDOT denied Christopher Land’s request for a new traffic signal on Gallows Road, but the company agreed to contribute $200,000 for a signal if one is approved in the future.

In response to neighbors’ previous complaints that people younger than 55 would live in Woodburn Manor, the company agreed to tighten the rules.

The residents of each unit would consist of at least one occupant who is 55+ along with that person’s spouse, roommate, or caretaker, said Christopher Land’s representative Lori Greenlief. No children under age 18 would be allowed unless mandated by court order. Guests and adult children could stay no longer than 60 calendar days a year, and short-term lodging would not be permitted.