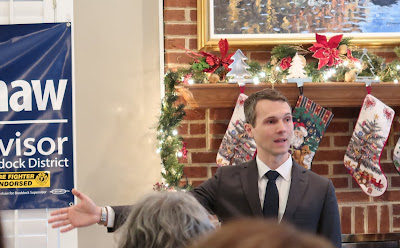 James Walkinshaw, a Democratic candidate for the Braddock District seat on the Fairfax County Board of Supervisors, says his three key issues are education, transportation, and climate change.

If elected, he would succeed John Cook, a Republican, who is not running for re-election.

An aide to Rep. Gerry Connolly for the past 12 years, Walkinshaw told the crowd at his campaign kickoff event Dec. 16 how he worked with the congressman on funding for Metro’s Silver Line, the VRE, and the Fairfax County Parkway.

Walkinshaw’s transportation priorities for the BoS include “getting cars off the roads by giving commuters more choices,” such as more transit and expanded bus service.

Regarding education, he said, “A high-performing school system doesn’t happen by accident. Our challenge is to maintain and build on our investments in the schools.”

To address climate change, Walkinshaw would promote a clean-energy economy and put Fairfax County government on the path to becoming carbon neutral by setting sustainability goals for buildings, government operations, and vehicles.

Born and raised in Northern Virginia, Walkinshaw lives in Ravensworth Farm, where he is second vice president on the civic association. He has been a mentor to young, disadvantaged Hispanic boys for the past six years.

If one could describe Walkinshaw in one word, that would be “integrity,” Connolly said at the campaign kickoff. “I’ve never seen him flinch from a tough decision or compromise on a moral issue.”

Walkinshaw has been endorsed by Connolly, Fairfax County Board Chair Sharon Bulova, Braddock school board member Megan McLaughlin, Lee District Supervisor and candidate for board chair Jeff McKay, and at-large school board member Ilryong Moon, all of whom were at the campaign kickoff.

Posted by Annandale Blog at 2:30 PM

Email ThisBlogThis!Share to TwitterShare to FacebookShare to Pinterest
Labels: Board of Supervisors, Braddock District, elections, politics