McElveen launches campaign for chair of Fairfax County Board of Supervisors 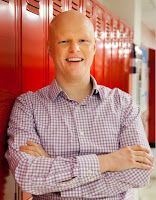 McElveen would succeed Sharon Bulova, who is retiring from the board after her term ends at the end of 2019.

McElveen will face Supervisor Jeff McKay (Lee), and any other Democratic candidates who decide to run, in a primary on June 11. No Republican candidates have officially announced yet.

In a video statement announcing his campaign, McElveen said: “While Fairfax County is a wonderful place to live for many, it isn’t working for everyone. Past decisions have increased the stark divide between the haves and have-nots, effectively creating two Fairfaxes.”

McElveen has served on the school board since 2012. He is the associate director of The Brookings Institution’s John L. Thornton China Center, where he coordinates with the Brookings-Tsinghua Center at Tsinghua University in Beijing and conducts research on Chinese politics and society and U.S. foreign policy.

As chairman of the BoS, McElveen’s priorities include:
During his seven years on the school board, McElveen says he has “worked with parents, students, and educators to keep the school system the best in the nation, while also restoring competitive compensation for teachers and implementing important reforms in the areas of student mental health supports, student discipline, later high school start times, full-day Mondays, and school safety and security.”

Among his other accomplishments, McElveen says he led the school board in championing increased legislative advocacy so that every Fairfax County school receives its fair shake from Richmond, improved public engagement, curriculum internationalization, LGBTQ protections, gun violence prevention, and healthier food options.

Born in Tysons Corner, McElveen graduated from George C. Marshall High School. He holds a B.A. in anthropology and East Asian studies from the University of Virginia and a master’s of international affairs in human rights from Columbia University. He lives with his wife, Xuan, and daughter, Sierra, in McLean.
Posted by Annandale Blog at 12:00 PM

Email ThisBlogThis!Share to TwitterShare to FacebookShare to Pinterest
Labels: Board of Supervisors, elections, school board