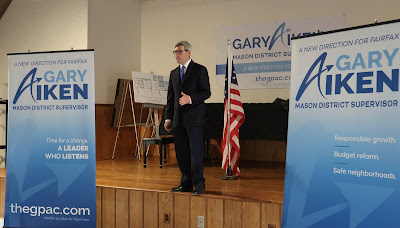 Gary Aiken, the Republican candidate for Mason supervisor, said his theme is: “It’s time for a change and time for a leader who listens.”

Aiken, the treasurer of the FCRC, is running against Mason Supervisor Penny Gross, who has been on the Board of Supervisors since 1996

Aiken’s campaign has raised just over $11,500, compared to $120,700 by Gross, according to the Virginia Public Access Project.

Aiken said he was motivated to run after the Jewish Community Center of Northern Virginia, which he lives near and where he sends his children, was attacked, and he no longer felt safe. “For it to be desecrated is a real travesty,” he said. “In a majority minority district, it’s important that everyone feels safe.”

The JCC and a nearby church were vandalized with Anti-Semitic and racist graffiti two years ago, and there was a similar incident at the JCC in October 2018. (The FBI reports a 17 percent increase in hate crimes nationwide between 2016 and 2017.)

As an employee at a mutual life insurance company – he is chief analyst and risk management officer at AAFMAA Wealth Management & Trust – Aiken said he thinks about actions taken today and how they will affect people in the future.

He warned that Fairfax County will suffer if the Board of Supervisors doesn’t do something about “out-of-control spending,” including “a $3 billion pension liability that is unfunded.” If taxes continue to rise, people will move away and businesses won’t want to come here, he said.

Aiken said Mason District residents told him they want to see more revitalization, “they feel Mason District has been passed over,” and “there’s been a lot of neglect here.”

Aiken said he would improve safety in the community by focusing on code compliance. Neighbors should not have a body shop in their front yard or pave over their yard with asphalt, he said. He would start with Bailey’s Crossroads, calling for “a cleanup crew in uniform to pick up trash.”

Cook told the audience that “Gary can win if he listens to residents” and if he tells them, “I want to make your neighborhood a better place.”

Posted by Annandale Blog at 2:09 PM

Email ThisBlogThis!Share to TwitterShare to FacebookShare to Pinterest
Labels: Board of Supervisors, elections, politics