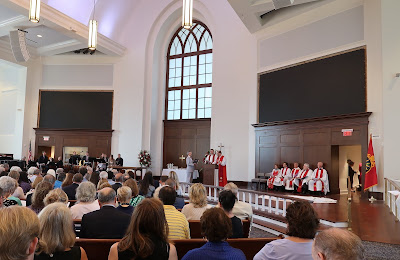 The Falls Church Anglican held its first Sunday service Sept. 8,  along with a consecration and dedication ceremony, in its brand-new building on Route 50.

The sanctuary holds about 900 people and was so full on Sunday that late arrivals watched the service on a monitor in the lobby. The building also houses the children’s ministry. The office building next door, which is owned by the Falls Church Anglican, has adult education programs and church offices. 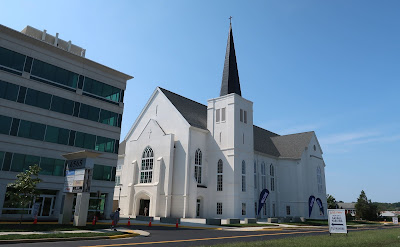 The church was built on what had been a multistory parking lot. The Falls Church Anglican tore it down and built a new parking deck on the other side of the office building.

The congregation had previously been based in The Falls Church, a church built in the 1730s in the City of Falls Church.

Following a lengthy court dispute, the Episcopal congregation was awarded ownership of the Falls Church property in 2012. The Anglicans purchased the office building at 6565 Arlington Boulevard in 2015, moved their offices there, and began planning a new church building.

Meanwhile, the congregation held church services in leased space at Bishop O’Connell High School and other locations. The church refers to its years of homelessness as its “tabernacling season.” The Sept. 8 service also celebrated its new rector, the Rev. Dr. Samuel Ferguson.
Posted by Annandale Blog at 9:00 AM