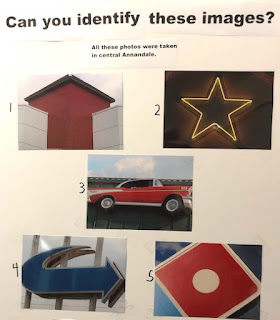 Todd Bolick, a resident of Sleepy Hollow Woods, won the photo contest drawing sponsored by the Annandale Blog at the Taste of Annandale. The prize is a $25 Visa gift card.

The contest called for people to identify five photos taken in central Annandale. We thought it would be easy, but only a few people got them all right.

Bolick has always lived in Annandale. He attended Belvedere Elementary School, Poe Middle School, and was a member of the Annandale High School Class of 2008.

He was was on the track team and the drum line in the marching band at Annandale HS.

Bolick attained Eagle Scout status in the Boy Scouts and currently manages the Boy Scout program for all of Loudoun County.

He says this year’s Taste of Annandale “was even better than last year’s, with more food variety and better entertainment.” He ran in the 5K and especially enjoyed the acrobatic performance by Monarca in Flight and the Annandale High School orchestra. His one suggestion for improving the festival next year: more trash cans.

Email ThisBlogThis!Share to TwitterShare to FacebookShare to Pinterest
Labels: Taste of Annandale