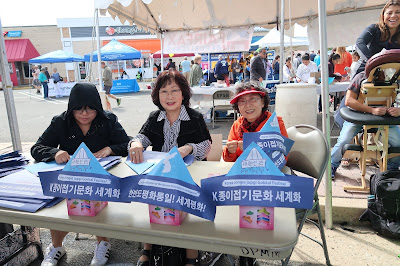 The Taste of Annandale got some international coverage, as Korea Bizwire, a publication based in Seoul, ran a brief story about a paper hat-folding project at the Oct. 5 street festival.

The paper hats assembled at the Taste of Annandale are part of a worldwide movement to collect 80 million conical hats to promote world peace and the reunification of the Korean peninsula.

According Korea Bizwire, “the event brought a positive response from the visitors and local residents, as well as local politicians.”

Email ThisBlogThis!Share to TwitterShare to FacebookShare to Pinterest
Labels: Taste of Annandale