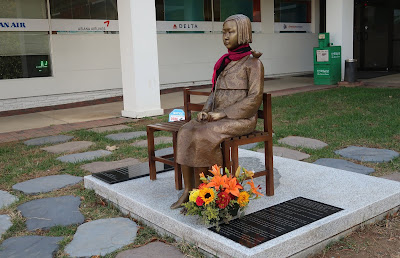 Annandale has a new statue memoralizing the “comfort women,” a euphemism for the Korean women forcibly taken by the Japanese military to serve as sex slaves during World War II.

The “Statue of Peace,” featuring a seated girl next to an open chair, was installed at 7601 Little River Turnpike in front of the building that houses the Korea Times and Hans Travel.

The unveiling ceremony on Oct. 21 was organized by the Washington Coalition for Comfort Women Issues; the National Unification Advisory Council, D.C. Chapter; and the Executive Committee of the Statue of Peace Washington Butterfly for Hope.

A press release about the Statue of Peace unveiling says it commemorates former comfort women’s “bravery, endurance, and longing for justice” and also serves as “a physical reminder of the past wrongdoing and inaction of the Japanese government on the demands by victims.” Those demands include an official apology and legal reparation.

At the ceremony, Gil Won-ok, a 92-year-old survivor, said her “youth and dreams” were taken away at the age of 13 when she was forced into a Japanese military brothel in China. She also criticized the Japanese government for failing to issue a sincere apology.

The first statue to memorialize the comfort women was installed in front of the Embassy of Japan in Seoul, Korea, in 2011.

The Annandale statue is the fifth Statue of Peace and the 14th comfort women memorial in the United States. A Comfort Women Memorial Peace Garden was installed behind the Fairfax County Government Center in 2014.

The statue, designed by Kim Seo-Kyung and Kim Un-Sung, includes these symbolic elements:
There’s a large display board describing the Statue of Peace at HIZ Creative Design next door at 7535 Little River Turnpike.

The organizers had initially hoped to place the statue in Washington, D.C., but the approval process proved to be “very difficult and complicated” and could have taken years, said Jungsil (Julie) Lee, president of the Washington Coalition for Comfort Women Issues.

But, “Koreans are impatient people,” Lee said, so “there was a lot of sentiment to get it done in 2019.” Its current location, at the gateway to Annandale from the beltway in front of the iconic Korea Times building, will draw more visitors to the community, she said. Meanwhile, the groups are still hoping to get another statue installed in D.C.

The unveiling drew people from across the United States, as well as local elected leaders. Just as pilgrims in the Middle Ages brought mass tourism to small towns along the way, Lee said, this statute could heighten the visibility of the small town of Annandale.

In addition to commemorating the comfort women, she says, the statue also can be seen as a way to think about the victims of all human trafficking.