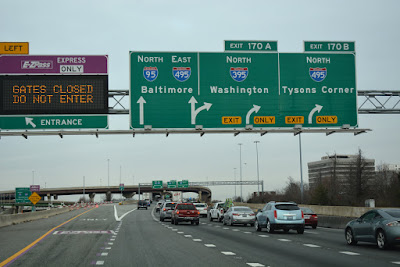 The express lanes on Interstate 395 – running for eight miles from near Edsall Road to the entrance of the 14th Street Bridge – will take effect on Sunday night, Nov. 17. The two reversible HOV lanes are becoming three HOV or toll lanes in each direction.

To drive on the express lanes, you’ll need E-ZPass or E-ZPass Flex transponder. There will be dynamic pricing, with the toll amount based on traffic congestion.

Tolls could be as high as $20 or $30 and would average around $8, reports Transurban, the company hired by the Virginia Department of Transportation to operate the express lanes. Overhead signs with toll amounts will be updated every 10 minutes.

The rules for the I-395 express lanes will be the same as those on the beltway and I-95: Carpools with three or more people will ride toll-free with an E-ZPass Flex set to “HOV on.”

The HOV corridor on I-395 will close at about 8 p.m. on Friday night, so crews can complete final preparations before the express lanes can open. There will be rolling closures along the corridor in both directions throughout the weekend.

On Sunday night, drivers should not attempt to enter the northbound express lanes until the gates are up and police are no longer blocking access to the entry ramp.

There will be continuing construction along that corridor, as new sound walls are installed, and a regular southbound lane is being extended between Duke Street and Edsall Road. That lane is expected to be completed next spring.

Drivers who use the lanes without an E-ZPass will get a bill in the mail, even if they met carpool requirements. Drivers who get in the express lanes by accident can call Transurban at 855-495-9777 or fill out an online form.

Virginia State Police will enforce the HOV rules in the toll lanes. Carpoolers who don’t have an E-ZPass Flex can register their license plate for one week of free rides to give them time to get a transponder.

Transponders can be ordered online or purchased at certain retail stores.

Motorcycles can ride free in the express lanes. If they already have an E-ZPass, they won’t be charged.

Posted by Annandale Blog at 5:08 PM