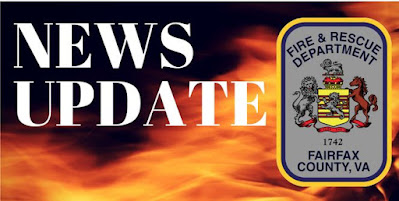 Two firefighters sustained minor injuries rescuing a dog from a house fire in the Parklawn community in Lincolnia May 20.
The fire, at a one-story, single-family house in the 4000 block of Braddock Road, started at about 6:20 p.m. in the kitchen, the Fairfax County Fire and Rescue Department reports. Smoke was visible from the front door and roof.
No one was home at the time. A passerby knocked on a neighbor’s door and alerted him to the fire. The neighbor called 911. Smoke alarms were present, but it is not known whether they sounded.
Fire investigators determined the fire was accidental and was caused when the electric range was unintentionally turned on and ignited combustibles left on top of the range. Damages were estimated at $93,750.
Two occupants were displaced by the fire. They declined assistance from the Red Cross.
Posted by Annandale Blog at 7:00 PM