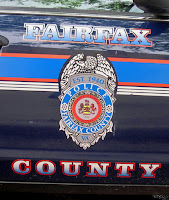 The Fairfax County Police Department’s crime report includes a malicious wounding/drug possession incident in the 8100 block of Braddock Road in Annandale at 4:40 p.m. on June 28.
A man at a park was approached by the driver of a silver Ford sedan who assaulted him, discharged a handgun, and drove away. Officers located the victim, Louis Blount Jr., 21, of Chantilly, who was found to be in possession of a large amount of marijuana. Blount was treated for minor injuries.
He was arrested and charged with felony possession with intent to distribute marijuana. The case remains an active investigation.
A man walking in the 6000 block of Knollwood Drive in Bailey’s Crossroads was robbed at 11 p.m. on June 27. The victim was approached by a group of individuals who displayed a handgun, stole his personal property, and left the area.
Two men broke into the Shell station at 5842 Columbia Pike in Bailey’s Crossroads at 6 a.m. on June 25. Nothing was taken. The suspects were wearing dark clothing.
When officers stopped a 2001 Honda Accord for a traffic infraction shortly after 8 p.m. on Carlin Springs Road/Seminary Road in Bailey’s Crossroads, they found narcotics, weapons, and ammunition inside the car.
The driver and two of the passengers were taken into custody. Trevon McKevie, 22, of Maryland, was charged with possession of marijuana, possession of a handgun by a felon, and possession of ammunition by a felon. Emmanuel Uwaifo, 21, of Maryland, was charged with possession of marijuana. Rashad Bilal, 22, of Maryland, was charged with possession of marijuana and obstruction of justice.
A tragic incident in Springfield is worth a mention here as a warning to other parents and the public. An 11-month-old girl died after being left in an unattended SUV for an extended period of time June 26 in the 6400 block of Meriwether Lane.
A preliminary investigation revealed the child’s father placed her in the rear seat of the SUV at his Springfield home and inadvertently left her there while he used another vehicle to run errands, the FCPD reports. After returning home, he then drove the SUV to an in-home daycare to pick up another child when he realized the 11-month-old was still in the back seat.
The Office of the Chief Medical Examiner will determine the exact cause and manner of death.
Detectives have consulted with the Fairfax County Office of the Commonwealth’s Attorney, and no charges are expected to be placed in this case.
Posted by Annandale Blog at 4:00 PM