The Annandale Healthcare Center during COVID lockdown: ‘worse than prison’

Residents of the Annandale Healthcare Center are stuck in their rooms all the time, with barely any outside contact, as large numbers of the patients are getting sick and dying from COVID-19.

The Annandale Heathcare Center, at 6700 Columbia Pike, has had 156 COVID cases and 55 deaths, the Virginia Department of Health (VDH) reports. That’s more than any other nursing home or assisted living facility in the state.

Residents and a family member who have reached out to the Annandale Blog say inadequate health precautions at the Annandale Healthcare Center might have contributed to the facility’s high rate of COVID-19 cases and deaths.

One resident, whom we’ll call “Angela,” is glad she tested negative for COVID, but says, “I’m not happy and feel uneasy over new outbreaks. It’s quite obvious they are not handling any of this correctly or taking it seriously.”

Angela says beds are only three feet away from one another with only a hospital curtain in between.  Another resident, whom we’ll call “Julia,” says some staff members wear personal protective equipment, but others – including nurses and housekeepers – don’t wear masks or gloves.

Related story: Virginia nursing home with the biggest COVID outbreak is in Annandale

On July 2, Angela received a memo and robocall from the center stating that, since the first week in April, 95 residents and 46 staff members were infected with COVID-19. It said 28 residents died – 11 in the facility and 17 in the hospital.

“It blew my mind when 11 people died here and they didn’t get them to the hospital,” she says.
[The facility’s parent company, CommuniCare, disputes the VDH statistics, maintaining there were only 28 deaths.]

In addition, Angela notes, 57 people who come to the Annandale Healthcare Center temporarily for dialysis have tested positive. 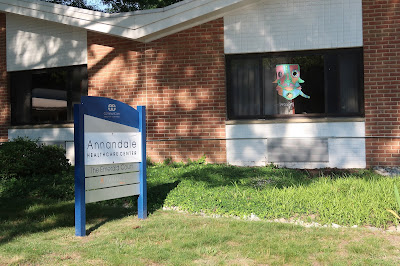 The complaints by the residents are borne out in a report by the Virginia Department of Health’s Office of Licensure and Certification.

The report, issued in May, cited numerous deficiencies in the Annandale Healthcare Center’s efforts to prevent the spread of COVID-19. It said staff weren’t following the protocols for health screening when they entered the building, didn’t always practice social distancing, failed to wash hands between rooms, and failed to properly use and dispose of personal protective equipment.

Stuck in the room

Living at the Annandale Healthcare Center under lockdown “is worse than prison,” Angela says. “Even prisoners get to go outside.”

“I stay in my room along with my roommate and only walk in the hall with a mask three times a week with therapy,” she says. “All meals are served in the room, and we can’t intermingle with other residents. We have no activities.” On top of that, cable television stopped working on July 9.

“If we step a foot out the door, they push us back in and close the door,” Angela says. “This is not right.”

While patients aren’t technically locked in their rooms, Angela says, “the doors are huge and weigh a ton because they are fire doors. They are too hard to open and balance and get through with a walker or cane.”

Julia hasn’t been outdoors since March and spends nearly all her time in the room she shares with a roommate, expect for occasional physical therapy. Staff provides PT “at their convenience,” she says, not on a regular schedule.

Angela believes there is inadequate ventilation because the air conditioning system is too old and is not working properly. “You can’t even open the windows a crack,” she says, because they are nailed shut to prevent escapes.

Chris Duncan, whose mother, Constance, died of COVID-19, believes the Annandale Healthcare Center didn’t do all it could to prevent a COVID outbreak and didn’t provide good enough care to infected patients.

The center advised Duncan in April that his mother tested positive for COVID. She seemed okay for a couple of weeks, but then she started having trouble breathing.

He tried to get her into a hospital, but the staff told him “they won’t send her to the hospital until she had a temperature of 100 and respiratory arrest,” he recalls. “In my mind, that is way too late.”

She was eventually transferred to Fairfax Hospital at Duncan’s insistence. She died on May 2, her 75th birthday, and he was able to have one final visit to say goodbye.

Duncan then spent weeks trying to get his mother’s belongings from the Annandale Healthcare Center. He was finally told he could pick up a bin with her name on it in the loading dock, but when he opened it at home, he found her documents, but also clothes and a birth certificate, Social Security card, and other papers belonging to someone else.

He is still trying to get the rest of her belongings. The clothes aren’t important but she had personalized pillows and blankets that he wants.

He also wants her medical records. An X-ray at the hospital showed she had random breaks in her vertebrae and he isn’t sure how that happened. Finally, on July 7, a court order required the center to hand over the records.

Both Angela and Julia say there have been problems at the Annandale Healthcare Center for years, long before the coronavirus outbreak. Employees have misplaced or failed to order the medications they need, for example.

The facility is not clean or well maintained, Angela says, and the furniture is scratched and “old as the hills.” The tiles are coming off the walls.  The toilet in her room sometimes fails to flush and keeps running, and staff fail to respond.

There have been periodic infestations of mice and ants. She had to throw away important papers that were stored in a nightstand because “mice peed on them.”

Her room doesn’t have a shower, and the shower across the hall is old and dirty. She hasn’t taken a shower in years, and instead uses the sink to wash up. “That’s how disgusting it is,” she says.

Almost three years ago, her former roommate “was throwing up all night, and they didn’t come to check on her,” even though Angela called multiple times. “She was dead by morning.”

In a pre-COVID incident she says, a patient escaped from the facility, went to a bar, got drunk, came back, took a knife, and stabbed another patient. [In May 2019, a patient was arrested for sexually assaulting another patient. Shortly afterwards, the name of the facility was changed from Sleepy Hollow Healthcare Center to Annandale Healthcare Center.]

There are a few really good staff members, Angela says, but “many of them don’t know what the heck they’re supposed to be doing – or they just don’t care.”

When a patient pushes the emergency button in their room, she says, “it could take half an hour before someone comes. They turn your light off and say they’ll be right back and they never come back.”

Reports from the Virginia Department of Health’s Office of Licensure and Certification over the past couple of years cite numerous problems at the Annandale Healthcare Center before the coronavirus outbreak.

A survey dated Dec. 5, 2019, found diabetic residents were given scheduled insulin and other medications hours late, for example, and the facility ran out of medications, including oxycontin, that had been prescribed for a patient with severe pain.

In another incident documented in the report, a resident who had been discharged from the hospital with orders not to be given any nutrition by mouth due to a risk of aspiration was given solid food for breakfast, lunch, and dinner.

A Nov. 21, 2019, survey found many deficiencies. To mention just a few of them: The center failed to prevent a patient from escaping; it didn’t have an emergency preparedness plan; and failed to conduct a criminal background check for new hires.

The same report notes inspectors found mice and mouse droppings in patients’ rooms, mice and roaches in the dining room, and flies breeding in a sink drain.

When citations are identified, a facility must submit an acceptable plan of correction to the Office of Licensure and Certification within 15 days of receiving the report. They have 45 days to put the corrections in place.

The federal Centers for Medicare and Medicaid Services “can impose different levels of enforcement actions to include denial of payment for new admissions, civil monetary penalties, and involuntary termination,” says Kimberly Beazley, deputy director of the VDH Office of Licensure and Certification.

“Involuntary termination is not a closure of the facility, but rather terminating the nursing home’s agreement with CMS to receive Medicare and Medicaid funding for its residents,” Beazley says. “State licensure regulations allow for denial of new admissions, suspension of license, or revocation of the license.”

A VDH task force advises the state on long-term care facilities and ensures they have enough resources to combat the coronavirus, VDH Deputy Commissioner for Population Health Dr. Laurie Forlano said during a conference call with reporters.

To reopen, Forlano said, a nursing home has to have logged 14 days with no positive tests.
Posted by Annandale Blog at 12:17 PM