The Fairfax County Planning Commission agreed July 22 to send on to the Board of Supervisors a proposal for a townhouse project on McWhorter Place in Annandale.
The supervisors will hold a public hearing on the project July 28. 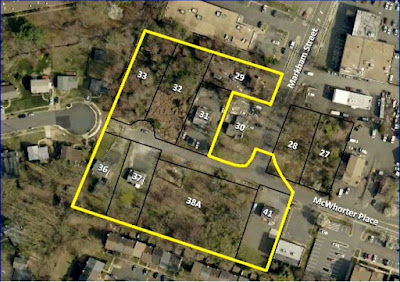 Christopher Land is proposing 43 townhouses on 3.4 acres along McWhorter Place at the intersection of Markham Street. Five of the townhouses would be workforce housing units affordable to households earning up to 80 percent of the area median income.
The developer is purchasing nine parcels from six owners. Several small houses would be demolished, and many trees would be cut down. The owner of parcel 30 on the map above refused to sell and plans to continue operating a commercial business on that site.
Related story: More details emerge on Annandale townhouse proposal
The project calls for an area on the other side of McWhorter Place (parcels 27 and 28) to be transformed into a small community park to be operated by the Fairfax County Park Authority.
At a Planning Commission hearing on July 15, a resident of Crestwood Manor expressed concerns about density and the impact on local schools. A resident of Annandale Terrace urged the county to not connect McWhorter Place for through-traffic.
The two segments of McWhorter will not be connected, commissioner Julie Strandlie of Mason District said at the July 22 meeting.
The developer agreed to add a pre-emption device on the traffic signal at Little River Turnpike and McWhorter. That allows emergency vehicles to get through the intersection quicker.
Posted by Annandale Blog at 11:30 AM