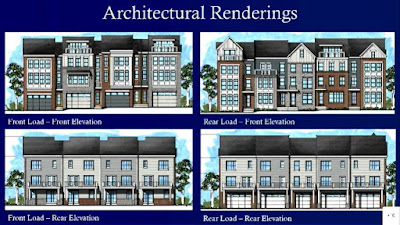 The Fairfax County Board of Supervisors on July 28 approved a proposal by Christopher Land LLC to build 43 townhomes on a 3.8-acre site on McWhorter Place and Markham Street in Annandale.
The Planning Commission recommended approval on July 22. The developer plans to consolidate nine parcels, including four with small houses that have been converted to commercial uses and five vacant properties.
Christopher Land had sought a tenth parcel but was unable to convince the owner to sell it. If the developer is able to acquire it later, it could build another three townhouses on it.
The project calls for a small community park across from McWhorter Place to be operated by the Park Authority.
Related story: Annandale townhouse project clears Planning Commission
Only one person spoke during the Board of Supervisors hearing. Aaron Kelley, speaking on behalf of the Crestwood Manor community, urged the board to reject or amend the proposal. He called it an overly dense, “unfeasible, poorly planned development” that would lead to overflow parking, more crime, and lower property values.
Mason Supervisor Penny Gross said the project would upgrade a “little bit of Annandale that time forgot.”
Posted by Annandale Blog at 8:30 AM

Email ThisBlogThis!Share to TwitterShare to FacebookShare to Pinterest
Labels: Annandale, Board of Supervisors, housing, land use, redevelopment