Updated, 11 a.m. 7/25/20: There was a shooting at the Fairmont Gardens apartments in the 4100 block of Wadsworth Court in Annandale on July 25.
The Fairfax County Police Department identified the victim as Jose Alexander Villa Lobo Guevara, 20, of Annandale. 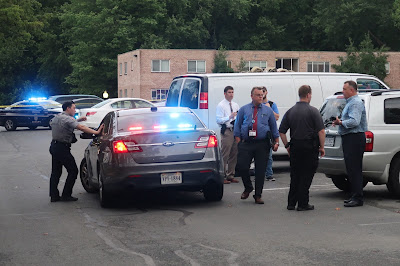 The man was still lying in the parking lot a couple of hours later, as detectives were investigating the scene.

The suspect is at large. Police initially reported the suspect left in a white van but that hasn’t been confirmed, says Sgt. Greg Bedor of the FCPD.

According to a resident of Fairmont Gardens, who came outside after hearing the gunshots, it took police about 15 to 20 minutes to arrive after the shooting. A fire truck arrived on the scene but there was no ambulance. The police come here all the time, but today they were late, he said.
The FCPD stated July 25 that when police arrived on the scene, shortly after 5 p.m., they found the victim “suffering from an apparent gunshot wound. Officers immediately rendered aid until rescue personnel arrived. Lobo Guevara was pronounced dead at the scene. The Office of the Chief Medical Examiner will conduct an autopsy to determine the cause and manner of death.”
“This is an active investigation and detectives are continuing to conduct interviews and process evidence,” FCPD states. “Preliminarily, detectives do not believe this was a random act of violence and do not believe there is an ongoing threat to public safety.”
Detectives are asking anyone with information about the shooting to call the Major Crimes Bureau at  703-246-7800, option 2, or submit a tip to Crime Solvers. Anonymous tipsters are eligible for cash rewards if their information leads to an arrest.
The is the sixth homicide in Fairfax County in 2020.
Posted by Annandale Blog at 7:32 PM